IMPORTANT- We are requiring all individuals that enter our clinic to wear a properly fitting face mask.

We are now accepting payments online through our patient portal.

6 Nail Symptoms That Shouldn't Be Ignored

6 Nails Symptoms That Shouldn’t Be Ignored

Nails can tell you a lot about what’s going on inside your body. They can be markers for anything from cancer to anemia. Keeping an eye on your nails can be crucial to your well being. Here are six signs that you shouldn’t ignore when it comes to your nails.

1. BROWN VERTICAL STRIPE ON THE NAIL
A brown vertical line on the nail may be a sign of a melanoma. While most melanomas don’t occur in the nail, they are found in 1 percent of Caucasians and about 20 percent of African Americans. It's possible for certain medications to cause a darkening line on the nail, which appears very dark or brown in color and reaches from one end of the nail to the cuticle. If this is the case, it's important to have it checked out by your doctor.

2. BRITTLE NAILS
Brittle nails can develop due to a nutrient deficiency in your diet or exposure to a chemical. Often times malnutrition plays a huge role in brittle nails, as well as iron-deficient anemia and thyroid disease. Nails grow from underneath the skin at what’s called the matrix and progress out towards the fingertip. Although some believe nails are made of calcium, they are actually made of a fibrous protein called keratin. People often take calcium suppliments to encourage their nails grow longer and stronger, but this won't actually do the trick. While calcium will make your bones stronger, eating a well balanced diet with lots of protein will promote strong, healthy nails. 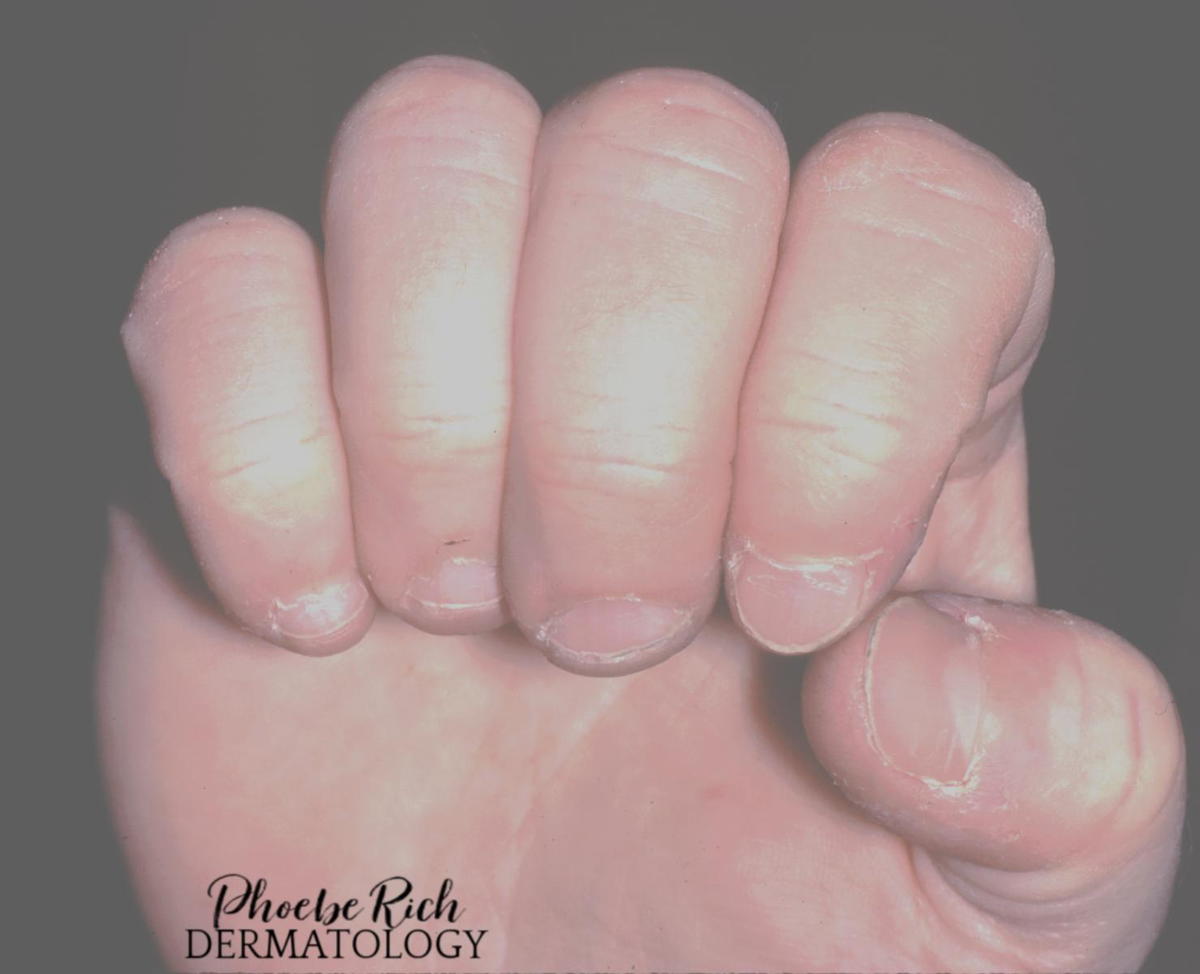 3. RIDGES ON NAILS
Vertical ridges on the nails are common, especially as you get older. However, deep horizontal lines, known as Beau’s lines, and more concerning. Beau’s lines are indications that something has caused the nail to stop growing. This can include trauma, a blood transfusion, a car accident, chemotherapy or stress. If the vertical ridges are truly bothersome you can use a ridge filler to help cover them up. Just be sure to avoid using a nail buffer. If the horizontal lines continue to deepen and you're concerned, always reach out to your doctor.

4. SMALL WHITE SPOTS ON NAILS
White spots on a nail are referred to as punctate leukonychia. Many people think they are related to a vitamin deficiency, but they are actually caused by trauma that occurs while the nail is forming. On average, it takes nails about 6 months to fully grow out. As time goes on these white spots will grow out as well.

5. YELLOW NAILS
Excessive yellowing of the nails may be associated with lung disease. Known as yellow nail syndrome, this very rare disease results in chronic infection and inflammation of the main air passages. Yellow nails, especially on the feet, can be a result of fungus. Either way, have these symptoms checked out by your doctor. 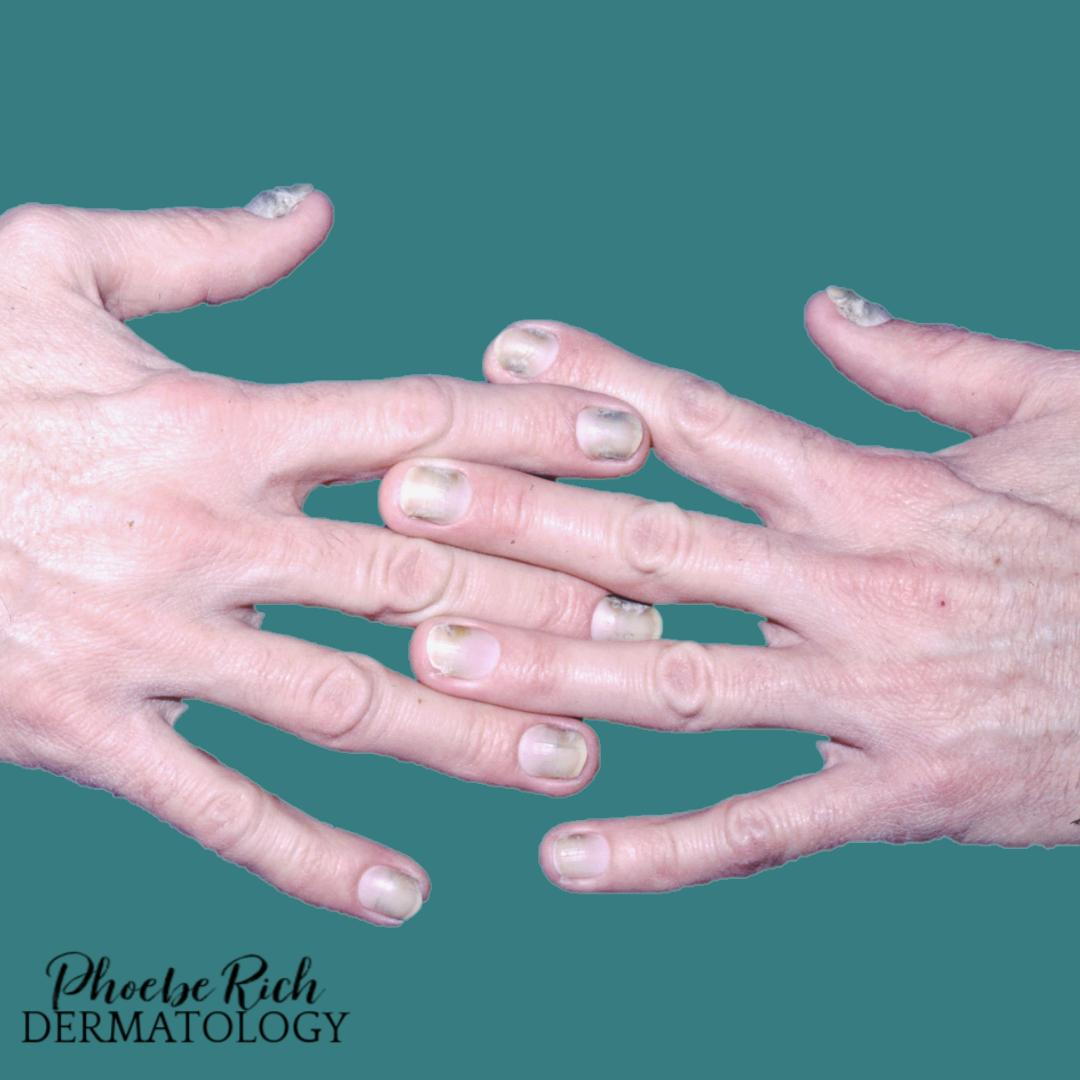 6. INFECTED, INFLAMED SKIN AROUND THE NAIL
Infected, inflamed and reddened skin around the nail is called paronychia and is the result of the cuticle being pushed back. Although it is a common practice among nails salons, it's not good for nail health. When the cuticle gets pushed back it allows for bacteria, fungus, yeast and mold to get underneath the skin and cause an infection. If it does become inflamed and painful, you should soak it in hot water two to three times a day. If you don't notice improvement, contact your doctor who may prescribe a round of oral antibiotics. The best way to prevent paronychia is to use a sharp tool when trimming or cutting the cuticle. After showering, you can gently massage the cuticle with a towel to remove any dead cells.

While this is not a complete list of concerning nail symptoms, it does include symptoms that are very important to be aware of when deciding if you should consult your doctor.

As always, feel free to leave a comment below with any questions. We'd love to hear form you!

Toenail Fungus and Athlete's Foot
(18 and over)

Nail Psoriasis
(18 and over)

Call our new research patient line to see if you qualify!